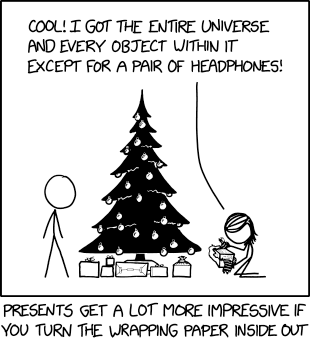 Wow, rude of you to regift literally every gift that you or anyone else has ever received. 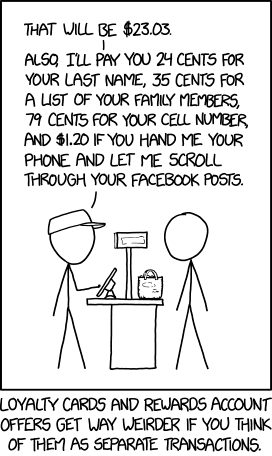 oh this is the way my brain sees all these cards
Tucson, AZ

We'll pay you $1.47 to post on social media about our products, $2.05 to mention it in any group chats you're in, and 11 cents per passenger each time you drive your office carpool past one of our billboards.

alt_text_at_your_service
reply
We'll pay you $1.47 to post on social media about our products, $2.05 to mention it in any group chats you're in, and 11 cents per passenger each time you drive your office carpool past one of our billboards.

Reaching people on the internet by Matthew Inman
Thursday October 26th, 2017 at 4:23 PM

The Oatmeal - Comics by Matthew Inman 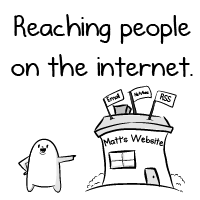 Glad I still use RSS

Gregidon
Indeed, no algorithm to decide what I want to see

BLueSS
reply
The Oatmeal is about 3 years behind the times on this one.

I miss the old days.
Portland, OR, USA

We brought it on ourselves
Belgium

I understand that the New Horizons craft used gravity assist from Jupiter to increase its speed on the way to Pluto. I also understand that by doing this, Jupiter slowed down very slightly. How many flyby runs would it take to stop Jupiter completely?

More than we can afford.

Spacecraft sometimes perform close flybys of heavy, fast-moving planets, which can let them gain speed without using fuel.[1]It may sound strange that you could gain speed by flying toward a planet and then away from it, since intuitively it seems like any speed you gain from flying toward it, you should lose flying away. But it's not really about gravity at all; gravity assists could work just as well with ropes or springs, if you could make them big enough. When you you fly toward a planet, swing around it, and fly back in the direction you came, it's as if you "bounced off" the planet. If the planet is moving, this bounce can give you an extra kick—like a tennis ball thrown at the windshield of a passing truck. You can check out What If #38 for details—or, at least, a drawing of the tennis ball thing. Due to conservation of momentum, the maneuver also slows the planet down very slightly, but no one really worries about that. Planets don't slow down much during a flyby because they're so much heavier than spacecraft. When New Horizons flew by Jupiter, it gained about 4,000 m/s of velocity, while Jupiter lost about 10-21 m/s.[2]The geometry is a little complicated, since they were changing both speed and direction. If you want to learn more, look for a copy of this paper; it's a great tutorial.

10-21 meters per second may not sound like much, but it very slightly changed Jupiter's orbit, shortening its year and bringing it slightly closer to the Sun. Thanks to that flyby, by the time the Sun goes supernova, Jupiter's calendar will be several dozen nanoseconds out of sync from where it would be otherwise! "Several dozen nanoseconds out of sync" isn't really satisfying, so we'll definitely need more than one flyby. How many can we pull off?

This would create some problems. For one, New Horizons carries a chunk of plutonium for power. This chunk—about 10 kg of it—was made from uranium in a reactor. To make enough plutonium for 68,000 New Horizons would require a substantial chunk of the world's uranium reserves.

But it gets worse.[4]It always seems to, with plutonium. When NASA launches a spacecraft carrying plutonium, they estimate the odds of a launch accident which would release radioactive material into the atmosphere. Usually, these odds are around 1 in 300. With 68,000 launches, then, we can expect a little over 200 nuclear accidents, which probably isn't good. But it would all be worth it if we could slow down Jupiter! Sadly, 68,000 New Horizons probes aren't nearly enough. We'd still only rob Jupiter of a tiny fraction of its speed. Over the lifetime of the Solar System, the error in Jupiter's calendar would only add up to 2 milliseconds.

If we made the spacecraft cheaper, we could send more of them, but sooner or later we'd start running out of materials. We'd definitely run out of fuel for all these rocket launches, but let's assume we've built some kind of space elevator to make launches cheap. We'd run out of uranium (to make the plutonium) pretty quickly, but we could replace the uranium with a chunk of lead—after all, this spacecraft doesn't really need to work.

Eventually, though, we'd start running out of lead, too. If we replaced the lead with something else—say, rocks, or old garbage—we'd run out of that, too. At some point, in our desperate attempts to reduce Jupiter's forward speed, we'd be reduced to stuffing handfuls of rocks and dirt into a burlap sack with a NASA logo on the side. Then, believe it or not, we would run out of rocks.

The Earth's crust only has so much stuff[5]This is the technical term. in it. Even if we peeled up the upper few dozen kilometers of crust and flung it at Jupiter—and for the record, I do not recommend we do this—it would trim less than a single mile per hour off Jupiter's speed.

Really, it makes sense that this plan doesn't work. Earth weighs a lot less than Jupiter,[6]Earth weighs almost exactly pi milliJupiters. so even if we throw the entire Earth at Jupiter, it would still only reduce Jupiter's speed by a fraction of a percent—on the order of a few dozen miles per hour. The situation is similar to the one in the tennis ball analogy from earlier: If you want to stop a truck with tennis balls, the tennis balls need more momentum than the truck, which means they need to be extremely heavy, fast, or both.

And at the core, that's the problem with this idea. Gravity assists are just like throwing a tennis ball at a speeding truck, and to stop a truck ... pmac
reply
lol. the tennis ball says "penn 15", or "pennis". It's a dick joke.
Atlanta, GA
Next Page of Stories